The City shows its support for Calgary Flames playoff run 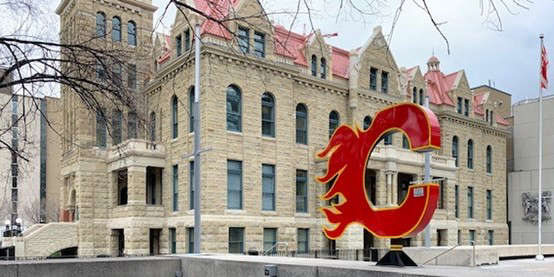 "If you shoulder check, so will Lucic. Go Flames Go!" and "Be like the Dallas Stars, stay in your lane," have appeared on the road signs so far this playoff season. Calgarians are asked to get in on the fun and submit their Flames-related traffic ideas through the webpage.

The Flaming ‘C’ is on display again at the Municipal Plaza, and digital traffic signs are filled with support for the Calgary Flames NHL playoff run.

Part of Traffic Tuesday program, where every week a new digital safety message is displayed on select Calgary roadways, our messages during the playoffs are aimed at showing support for the Calgary Flames. Tonight, they face the Dallas Stars in Dallas, for game six of round one.

For more support, Calgarians and visitors can check out the metal flaming ‘C’ sitting in front of the Municipal Building. When the Flames won the cup in 1989, it was built by the welding and fabrication shop with a special mounting piece to hold the Stanley Cup for the victory parade, 36 years ago.  It was then displayed at the Municipal Building so Calgarians could come down and take photos with the Stanley Cup.

It was on display in 2004 at the Manchester Centre, when The Flames beat the odds and made it all the way the seventh game of the Stanley Cup Finals, and again brought out in 2015, when the team made it to round two of the playoffs.

"We are very happy to join all the Flames fans in our city and show support for our hometown team in another quest for a Stanley Cup and share this piece of Flames history with all Calgarians," said Jilian Henderson, Executive Advisor with Facility Management at The City of Calgary. 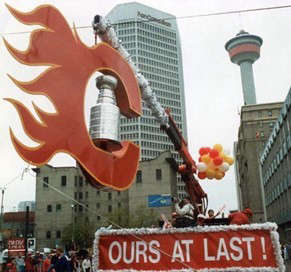