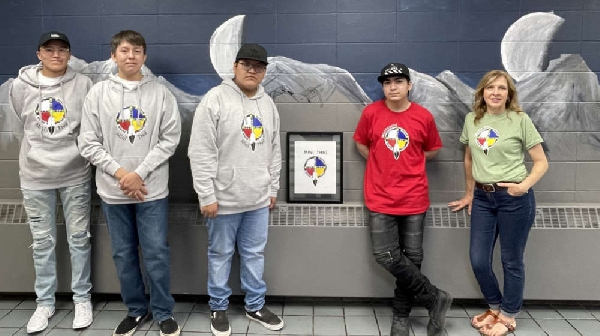 "I think that we had a pretty good vision, and I think we had a lot of excitement early on. We knew we wanted to make something that was really quality, that people would be really proud to wear in their community, and it's also about taking the name back of a community" - Renette Kruz, English teacher at Morley Community School

A group of five Morley Community School students from the entrepreneurial academy have created a clothing company, The Îyethka Trading Co.

English teacher Renette Kruz who helped students with the entrepreneurial project, said the clothing company had humble beginnings and that it showcases both the Stoney language and culture.

One of the clothing lines is called “Mînî Thnî,” or “cold water” in the Stoney language. Kruz says that the clothing line was developed alongside the name change of the Morley townsite to the traditional name.

The five students from the Morley Community School entrepreneurial academy includes Jace Young, Theodore Mark, Lacavaler Simeon and Danton Holloway, Alicia Hunter, and with the help of their English teacher Renette Kruz. The group started selling their t- shirts and sweaters from the school’s Mînî Thnî mini-mart. Eventually, they used the sales to make additional clothing items to sell.

Kruz said that the initial vision she and the students had was good, and, as a result, demand for the clothes grew, with the Mînî Thnî name spreading across the community, even at hockey games.

All of the money the students made in this year’s sales were used towards grants for the graduating students.