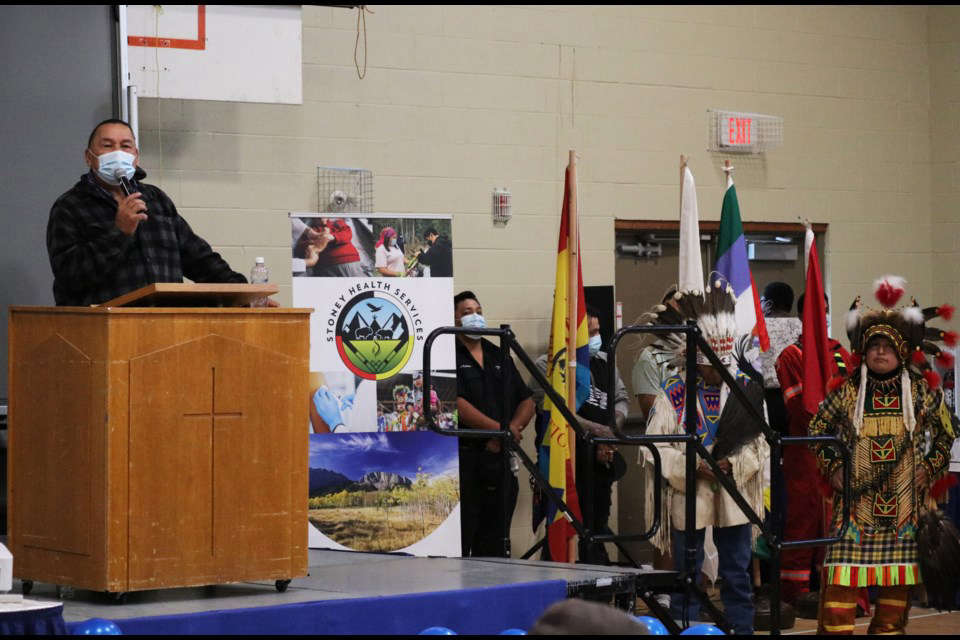 “Our community, our people … are very resilient,” said SHS executive director, Aaron KhanKhan. “This year we really wanted to honour and celebrate that together, acknowledging some of the successes we’ve made after a trying last few years.”

MÎNÎ THNÎ – Resilience was the theme for the third annual Stoney Health Fair at the Bearspaw Youth Centre in Mînî Thnî Wednesday.

For SHS executive director, Aaron Khan, who has been working in Îyârhe Nakoda First Nation for the past six years, the theme and chosen phrase align with his own observations of the community’s overall response to its collective challenges.

“Our community, our people … are very resilient,” said Khan. “This year we really wanted to honour and celebrate that together, acknowledging some of the successes we’ve made after a trying last few years.”

The health fair, which was cancelled in 2020 and 2021 due to COVID-19, showcased various programs and services SHS offers to the community, many of which have only emerged in the past five years at different satellite locations around Mînî Thnî, including occupational therapy and physiotherapy services, and a harm reduction program, among others.

“The event is really about getting people from the community out to see what resources are available to them,” said Khan. “Whether that’s information on a career in health services, looking for mental health supports or getting an immunization.”

In addition to showcasing its own services and programs, SHS invited other organizations from on and off the reserve to share information about other available resources. Some of the 50-plus exhibitors included the Stoney Family Resource Network, Alberta Health Services, Indigenous Services Canada and the University of Calgary, to name a few.

Khan noted that critical care and other acute health programs like chemotherapy aren't currently offered by SHS on the reserve, but the expansion and renovation of the Stoney Health Centre – expected to be complete by the end of 2023 – will include the addition of a dialysis unit.

Currently, the health authority occupies nine satellite locations to run various programs and services from due to space restrictions at the health centre. Once the expansion is complete, however, the building will nearly double in size from 1,112 square metres to 2,031 square metres, also doubling its capacity.

The growing number of SHS programs and services, along with the $11 million expansion project, are responses to a rise in demand and growing population.

The number of SHS staff, including contractors, has more than tripled in the same four-year time frame from around 30 to over 100. About 60 per cent of its current staff are from Îyârhe Nakoda First Nation.

An addictions treatment centre expected to open near the Wesley Elder’s Lodge later this year will see another 30 staff members hired to run the 8,500-square-foot facility.

“With this and the outdoor wellness centre opening up beside it, we hope to be able to make some further strides in addressing the opioid problem and addiction in our community,” said Khan.

Treatment programs will incorporate cultural teachings and practices at the recommendation of elders and community knowledge keepers. The wellness centre includes a teepee, sweat lodge, berry garden, firepit and a medicine wheel which can all be utilized by the treatment centre.

The Local Journalism Initiative is funded by the Government of Canada.