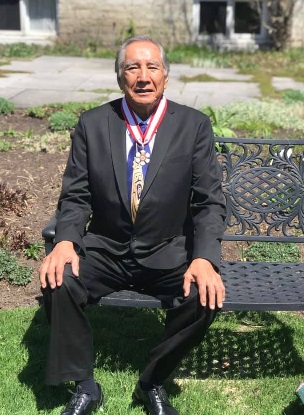 “A good leader looks at things from a different angle, always changes the conversation and attempts to build a good foundation and work themselves out of existence.” - Dr. Leeroy Little Bear

An Indigenous education leader from the Blood Tribe in Southern Alberta was honoured earlier this year.

Dr. Leroy Little Bear, a founding member of the nation’s first university-based Native American Studies program, was named to the Order of Canada.

Now serving as a special adviser to the president of the University of Lethbridge, Little Bear has earned recognition as an international scholar and a speaker, as well as a pioneer in advancing post-secondary education for First Nations students.

His latest honour, announced in Ottawa, follows an Alberta Order of Excellence citation, a “Key to the City” presentation by Lethbridge City Council, and honourary degrees from the U of L and the University of Northern B.C.

Little Bear was also named “Distinguished Alumnus of the Year” by the U of L’s alumni association in 2003 and was presented the U of L Speaker Research Award in 2017.

In 2003, he also received the National Aboriginal Achievement Award for Education.

"Excellence is no accident.. it is intentional with the heart and mind. So thankful to be on this journey with you. I don’t know why Creator blessed us so much with you, but I am eternally greatful to call you my father.  Congratulations to the Right Honorable Dr Leroy Little Bear (Iikaiskanii/ Kainai) in receiving the Order of Canada"