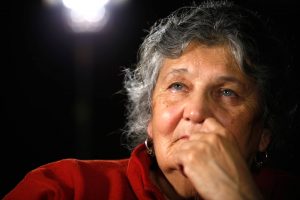 “I’m not going to speak about reconciliation and transformation. I have difficulty with those words. I stopped being a Christian a long time ago and for me those are Christian concepts. I want to speak from the place that I come from and how I came to this place.” –Maria Campbell

When Maria Campbell's mentor, lovingly referred to as Old Man, asked her where she was born, his response to her answer shook her.

“Without missing a beat, I said, ‘Park Valley,’ and he said, ‘Hmm, so you’re a white woman.’ And I was really disoriented by what he said to me. And I said, ‘I don’t understand. Why would you ask me if I was a white woman? You know I’m not.’ He said, ‘Indians are born in Indian places and white people are born in white places,” she said. Campbell is Cree/Métis.

His observations forced Campbell on a journey of self-discovery and decolonization.

“I can’t have conciliation ... I can’t go out and educate everybody else. I can’t do anything. I can’t even work with my family right away. I have to set things right for myself first and understand and then I begin with my family, and then I begin with my community and my nation. And then I can do all these other things with white people, with non-indigenous people because I have a place I can begin from,” Campbell explained.

Campbell presented virtually on Jan. 13 as part of the University of Calgary’s Indigenous Knowledge public lecture series. The series is part of UCalgary’s larger strategy towards reconciliation and meeting the Calls to Action directed to post-secondary institutions as set out in the 2015 final report by the Truth and Reconciliation Commission, which examined the legacy of residential schools.

Campbell is a much-credentialed scholar, the recipient of honourary doctorates, a published author and playwright, fluent in four languages, and Officer of the Order of Canada.

“I’m not going to speak about reconciliation and transformation. I have difficulty with those words. I stopped being a Christian a long time ago and for me those are Christian concepts,” said Campbell. “I want to speak from the place that I come from and how I came to this place.”

Coming to that place embraced putting things right and coming home, she said.

Old Man triggered in her the desire to get answers. She had left northwestern Saskatchewan where she had been born and raised, had travelled to Vancouver and was settled in Edmonton when Old Man spurred her on. When she left home, she swore she would never return to the community she saw as a place of death, a place falling apart like her family.

“I wanted a better life for myself. I wanted it for my child. I wanted it for the siblings I had lost to social services. And I often used to think about what was I searching for. What was this good life? I think about what I thought a good life was, an apple a day, a toothbrush, and the search … ended so badly, here I was back at home again, in the place I had run away from trying to find myself,” she said.

A couple weeks after Old Man posed the question, Campbell returned home. She was sitting with her father and asked him, “What did we call our land before it became Park Valley?”

He told her it was called Neekiwin or “The Stopping Place.”

Her father took her on a tour of the land and called the places by their Cree names and told her the stories. She had pushed those stories down, thought the memories of the names had been lost, but she found out that had not been the case. It was when they went to Omisi Pusqua or Oldest Sister Prairie, the place her father told her placentas were buried, a practice that continued until the women started giving birth in hospitals, that Campbell felt grounded.

“Up until then for probably 15 years of my life I wandered around looking for something good and couldn’t find it. Not knowing what I was going to do. Coming home when (Old Man) asked me where I was born and I came home and I stood in that community and listened to those names and those stories. It was like I had sunk down into the ground somehow. Something happened in my way of seeing things or my way of knowing, although I didn’t have that language at that time. I just knew that I had come home…. I felt comfortable. I no longer felt that I had to be apologetic for the place I came from. If there was a shame or anger all of those things just seemed like they were gone. They were not there and I’ve never had to deal with that stuff again,” she said.

Losing these stories and these memories is dangerous, said Campbell and quotes from Michel Foucault, who wrote that “memory is an important political resource” and used by the colonizer to control by replacing memories with other memories.

“We start to believe whatever they tell us about ourselves,” said Campbell.

Everybody’s story of where they came from or “their sense of place”, Indigenous and non-Indigenous, links them. Those stories are important, said Campbell, and they need to be honoured. But it also needs to be understood that every story comes with both a dark side and a beautiful side.

“All of us suffer from those things. And if we’re going to change that we all have to be able to be honest with ourselves, come to terms with ourselves first before we can begin the work of someplace else,” she said.

Understanding this, though, doesn’t mean she is above saying or doing hurtful things, said Campbell.

“(What) I have to do is rejig myself a little bit and I’m able to very quickly get back to that Omisi Pusqua Older Sister Prairie and remember why I have to constantly work at … decolonization and conciliation. That I have to constantly remember that everything that I do is what’s going to be inherited by those seven generations ahead of us and that I can’t be busy trying to change lives for other people. I have to change my own life first and that’s a full-time job,” she said.