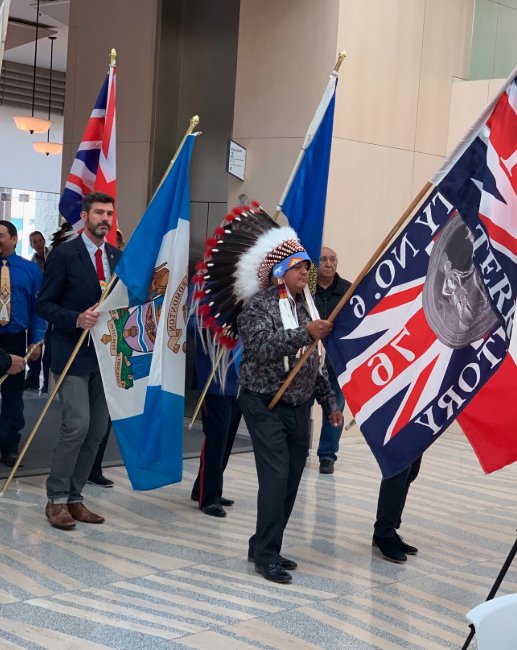 “The experience of coming together every year on this day, as partners, is humbling, It is important that governments, First Nations, civic partners and Edmontonians, all continue to keep our shared commitment to work positively together in a relationship founded on honour and respect.” - Edmonton Mayor Don Iveson

The Treaty 6 flag was raised on the City’s Community Flagpole this morning as Chiefs from the Confederacy of Treaty Six First Nations, Mayor Don Iveson and other government officials gathered to mark Treaty No. 6 Recognition Day in Edmonton.

The City of Edmonton and the Confederacy of Treaty Six First Nations signed a Memorandum of Cooperation and Dialogue in 2012. Since 2013, the City’s Indigenous Relations Office has organized the day to help recognize and bring awareness to Edmonton’s Treaty relationship with the First peoples of this land.

A formal program was held inside City Hall after the flag raising, which included dancing and drumming provided by the River Cree Drum Group and a ceremonial gift exchange between the City of Edmonton and the Confederacy of Treaty Six First Nations.

The Grand Entry to the #Treaty6 ceremony in City Hall. #yegcc #Edmonton pic.twitter.com/FwJeXIw9dF