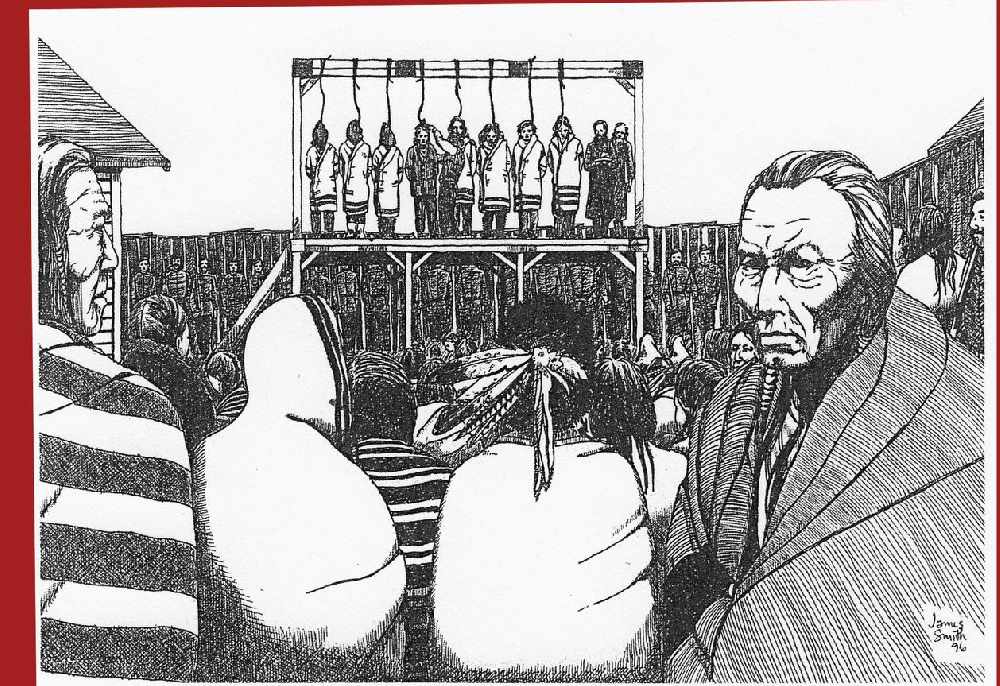 It is the anniversary of the executions which took place at Battleford in 1885, which were also the largest mass execution in Canadian history.

Six nêhiyawak (Plains Cree) and two Assiniboine men were hung at Battleford and their bodies dumped into an unmarked grave that remained undiscovered until the 1970s when erosion on the riverbank exposed some of the remains.

The men were named:

Some facts about the hangings at Battleford:

1. Judge Rouleau, the man who sentenced the eight men to die at Battleford, had his house in Battleford burned during the Resistance: The local newspaper at the time reported that Judge Rouleau: "is reported to have threatened that every Indian and Half-breed and rebel brought before him after the insurrection was suppressed, would be sent to the gallows if possible. In view of all the circumstances, and particularly as Judge Rouleau was a heavy loser pecuniarily by the Indian outbreak at Battleford, it is contended that he should not have been allowed to preside at the trial of the prisoners. A memorial has been received by the Department of Justice asking that the matter be investigated."

2. Although the men spoke Cree - not English, none were provided with a translator at their trials.

3. Almost all of the historical writings about the hangings were written from the perspective of settlers. "Blood Red the Sun" and other narrative accounts paint the men as criminals. Barry Degenstein, local author of "In Pursuit of Riel," as one relatively recent example, has continued to assert the men were "cold blooded murderers of innocent civilians." (See: https://www.newsoptimist.ca/…/grave-not-that-of-heroes-and-…) It is important to remember that the North West Mounted Police (now Royal Canadian Mounted Police) played a major role in colonizing the region around the Battlefords and committed serious violent acts against Indigenous people here. The history of the Battle of Cut Knife Hill and other major events are primarily told in history books and other accounts from the perspective of the colonizers and settlers. (See also: Views from Fort Battleford: Constructed Visions of an Anglo-Canadian West - https://archive.org/details/ViewsFromFtBattleford)

4. Hayter Reed, the Assistant Indian Commissioner in 1885, wanted a public execution. He asked the Lieutenant Governor to send any Indians who were sentenced to death during the second series of Regina trials so they could be executed with those sentenced to die in Battleford. He insisted that "the punishment be public as I am desirous of having the Indians witness it - no sound thrashing having been given them, I think a sight of this sort will cause them to meditate for many a day and besides have ocular demonstration of the fact." This was echoed in the local newspaper. The Saskatchewan Herald’s P.G. Laurie understood the importance to the government of making the hangings a public spectacle. “We are not in favor of public executions as a rule,” wrote Laurie, “but we believe that in this instance it would have a wholesome influence on the Indians at large to have the extreme penalty of the law so carried out on those whom the court may find guilty.” Laurie viewed the hangings as a type of deterrence to further violence, arguing that the calm administration of punishment would impress the Native population more than further battlefield bloodshed. Laurie also agreed with the government that the executions should happen at the place of the capital trials, in Battleford. Laurie argued, “[I]f the Department of Justice will.. .permit the executions to be public, the sight will have such an effect upon the native beholders as will make them think twice before they again take up arms.” (See "A Lesson They Would Not Soon Forget" Chapter 3: https://drive.google.com/…/1yvqkd4LfbfO4YC5mWcQS0QfCPVEWNo_k)

5. The biography of Senator John Tootoosis notes at page 77 that among the witnesses at the hangings were "the Indian children from the Battleford Industrial School who had also been brought to see the eight men die. It was a part of their education that none of them would soon forget!"

6. One week prior to the hangings, Prime Minister John A. MacDonald wrote in a confidential letter to the Indian Commissioner: "The executions... ought to convince the Red Man that the White Man governs."

7. Little Bear continued to assert that he was innocent until his death.

8. "Loyal Til Death" (a thoughtful account of the true history of this period by Blair Stonechild and Bill Waiser - https://www.amazon.ca/Loyal-Till-Death-North-West-Rebell…/…/) discusses the terrorizing effect the hangings had on Indigenous people in the region: "As for the Indians assembled in front of the gallows, they watched in quiet horror as the men dropped to their doom and then silently moved off once the bodies had been placed in the coffins. Nothing was said or done. They simply returned to their reserves, trying to put behind them the shock of the executions. But to this day, the executions have remained a numbing event, comparable to an old scar on the soul of a people. Elder Paul Chicken of the Sweetgrass reserve recalled how the Indians of the area lived in morbid fear of being picked up and tried before "Hanging Judge Rouleau." Dressyman's grandson, meanwhile, related how his reprieved grandfather and several other men were forced to watch the executions and threatened with a similar fate if there was any more trouble. "My grandfather was there, he saw them hung, he watched it all," he recounted. "They didn't like the hanging... the law overdone it." Don Chastis, a descendent of one of the Cut Knife warriors, said that he often heard the Elders speak of the bravery of the condemned men, how they all sang on the platform in the face of death. He also speculated that the police refused to release the bodies for a traditional burial because the government did not want the men glorified as braves. "So they were forbidden to have anything to do with them. That's why they buried them right there in a mass grave," Chastis said. "It would have defeated the whole purpose of the hanging if they let these people [bodies] go." The Battleford trials and executions accelerated the exodus of Indians to the relative safety of the United States." (At page 226-227 of 'Loyal Til Death.')

9. There are almost no artistic works or photographs that depict the hangings other than the attached illustration from "Loyal Til Death" by Blair Stonechild and Bill Waiser - https://www.amazon.ca/Loyal-Till-Death-North-West-Rebell…/…/

We remember the eight men who were executed at Battleford, and encourage people to consider the perspective of the historical accounts and begin working to decolonize the accounts of this history.

Is it time to consider exonerating or posthumously pardoning the eight warriors executed at Battleford?