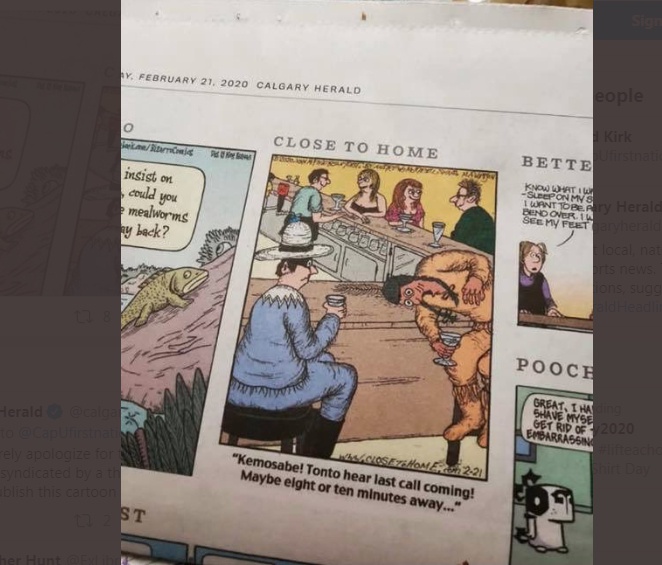 "We sincerely apologize to anyone offended by the content, Postmedia will no longer publish this cartoon"

The comic, which was published by Postmedia, owners of the National Post and dozens of papers across Canada showed Tonto and the Lone Ranger sitting together at a bar.

The cartoon Closer to Home is produced by American cartoonist John McPherson.

In the cartoon, two characters – the Lone Ranger and Tonto – are in a bar. Tonto has his head on the table.

Reaction on social was mixed to the comic, with some calling it offensive and insensitive. Others said the comic had no relation to Indigenous peoples today as it mocked a TV show from the 1950s.

The publishers of the comic, Andrews Mcmeel issued a statement about the comic apologizing for anyone who was offended.

“I would like to apologize to those who found the Feb. 21 panel to be offensive, as I in no way meant to characterize anyone in the comic in a racist way,” Close to Home’s creator, John McPherson, said in the statement. “My comics are meant to entertain, and I’m sorry that this one was hurtful to some readers. As the great-grandson of a Shawnee woman, I have always been interested in and concerned with the plight of native people, and I would never disparage them intentionally.”

The Calgary Herald also responded to dozens of tweets criticizing the comic, saying: “We sincerely apologize for the offensive content.”

On Friday an offensive cartoon appeared on the comics page of three Postmedia papers, including the Calgary Herald. We sincerely apologize to anyone offended by the content. The cartoon, Close to Home, is syndicated by a third party. Postmedia will no longer publish this cartoon.