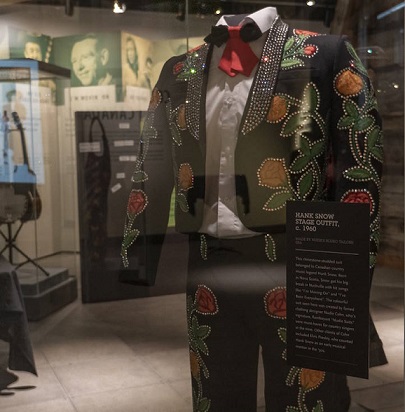 Outfits worn by Shania Twain, country pioneer Hank Snow and Lucille Starr, will be part of the National Music Centre’s “Homegrown Country” showcase, which opens its doors ahead of the Calgary Stampede.

Among the memorabilia on display is Snow’s vintage “Nudie suit,” a rhinestone-emblazoned outfit decorated with roses and designed by influential American tailor Nudie Cohn.

There’s also one of lang’s quirkiest looks, a dress adorned with felt cut-outs and miniature farm animals, created by the singer and her mother. She wore it on “The Late Show with David Letterman” and on the “Jim Henson Hour” in 1989.

Twain’s halter top from her first stadium tour in 1998 will also be part of the collection.

The exhibit at the NMC, which is part of Studio Bell in downtown Calgary, runs until Jan. 6.